It sounds like as much fun as it was.

I promised the BeckyLand readers immoderate amounts of information and photos from our Thanksgiving bacchanal, so here you go.

The word “spatchcock”—for those of you not up-to-date on archaic vocabulary—is a combination of “dispatch” meaning to prepare poultry for cooking (including all the indelicate parts from killing to feathering to trimming; you know, the stuff you don’t want to know about) and “cock” meaning bird. Dispatch the cock. Spatchcock.

The more modern meaning would be “tell your husband to remove himself from the recliner because it’s time to fight with this slippery turkey and we have a zillion people coming over soon.”

Come. Join me on a pictorial tutorial through a half hour of our Thanksgiving morning. Apologies to my vegetarian friends and those foreigners who might not comprehend the desperate measures and sacrifices Americans make on this holiest of Eating Holidays. 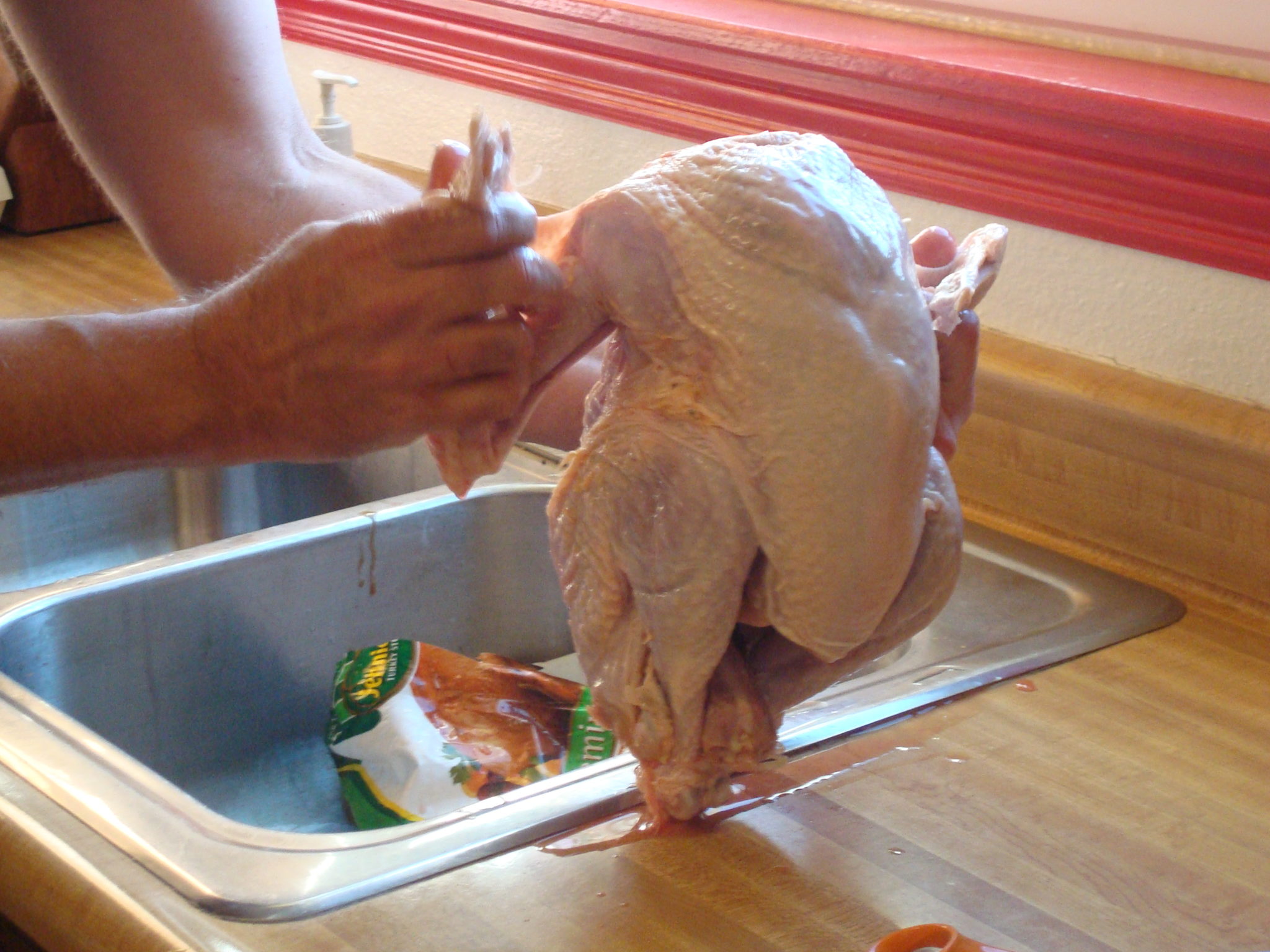 Posing and dancing the bird on the counter is the first step. That’s how you know if it’s ripe. 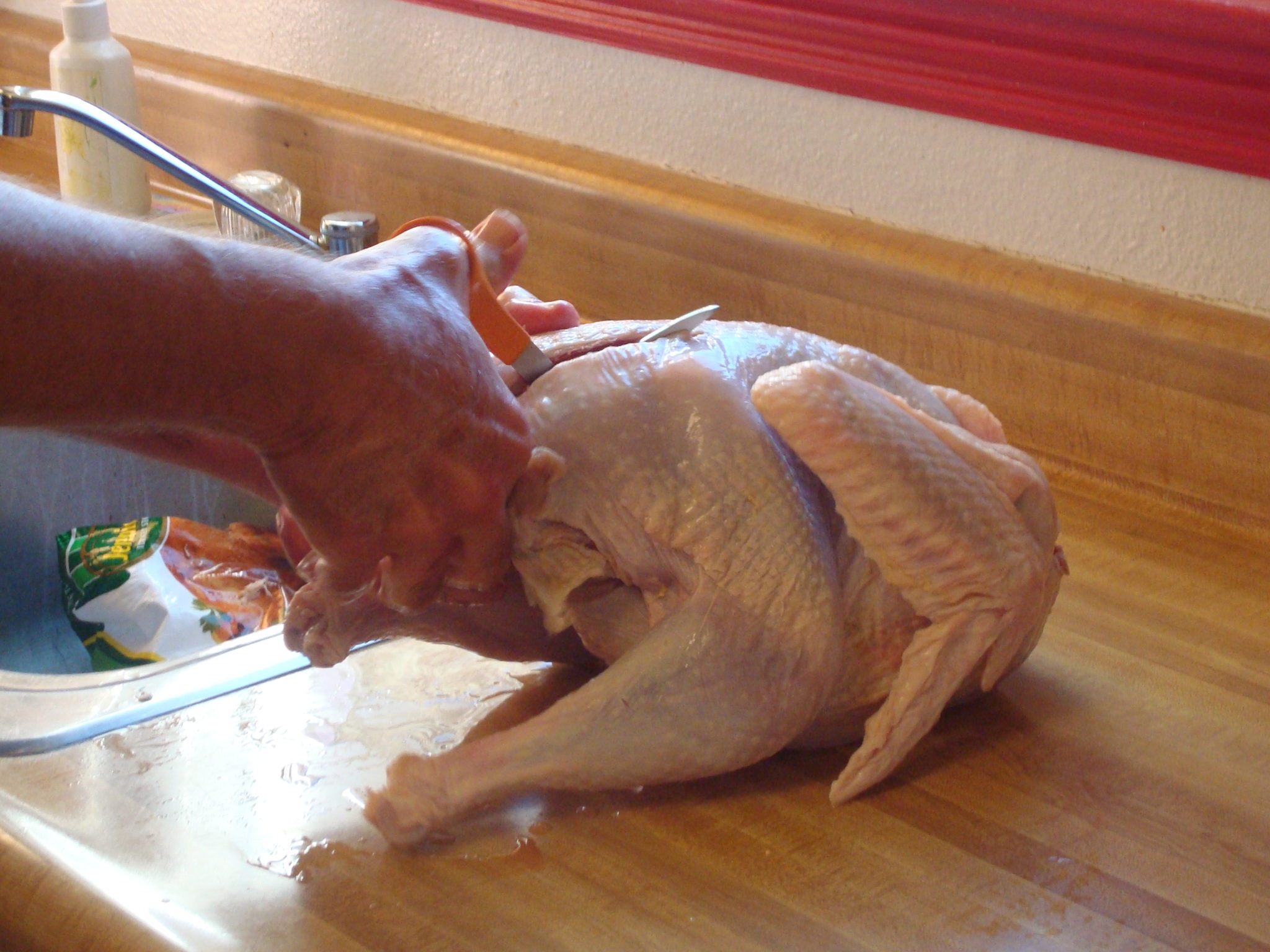 Cut one side of the backbone … 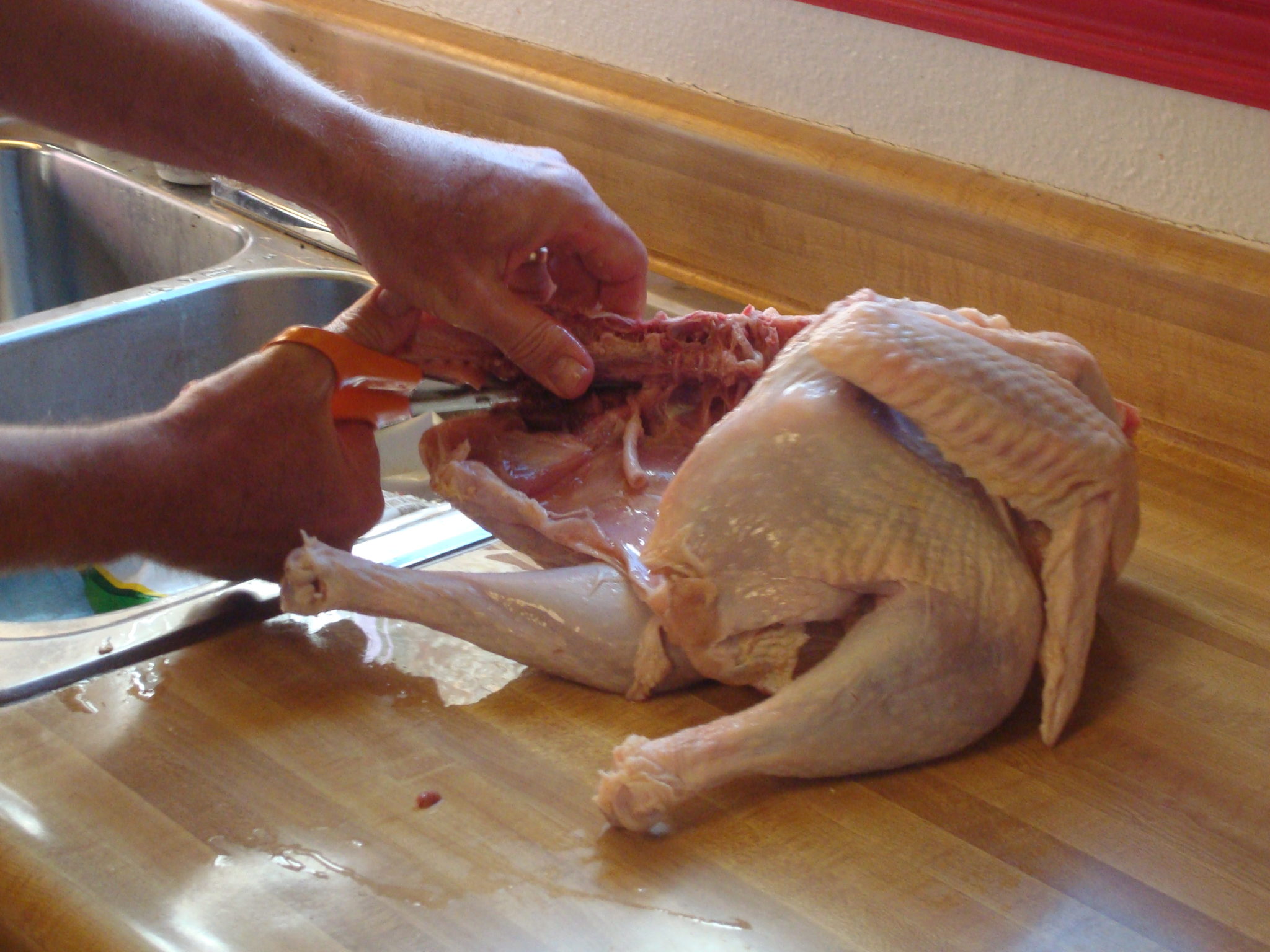 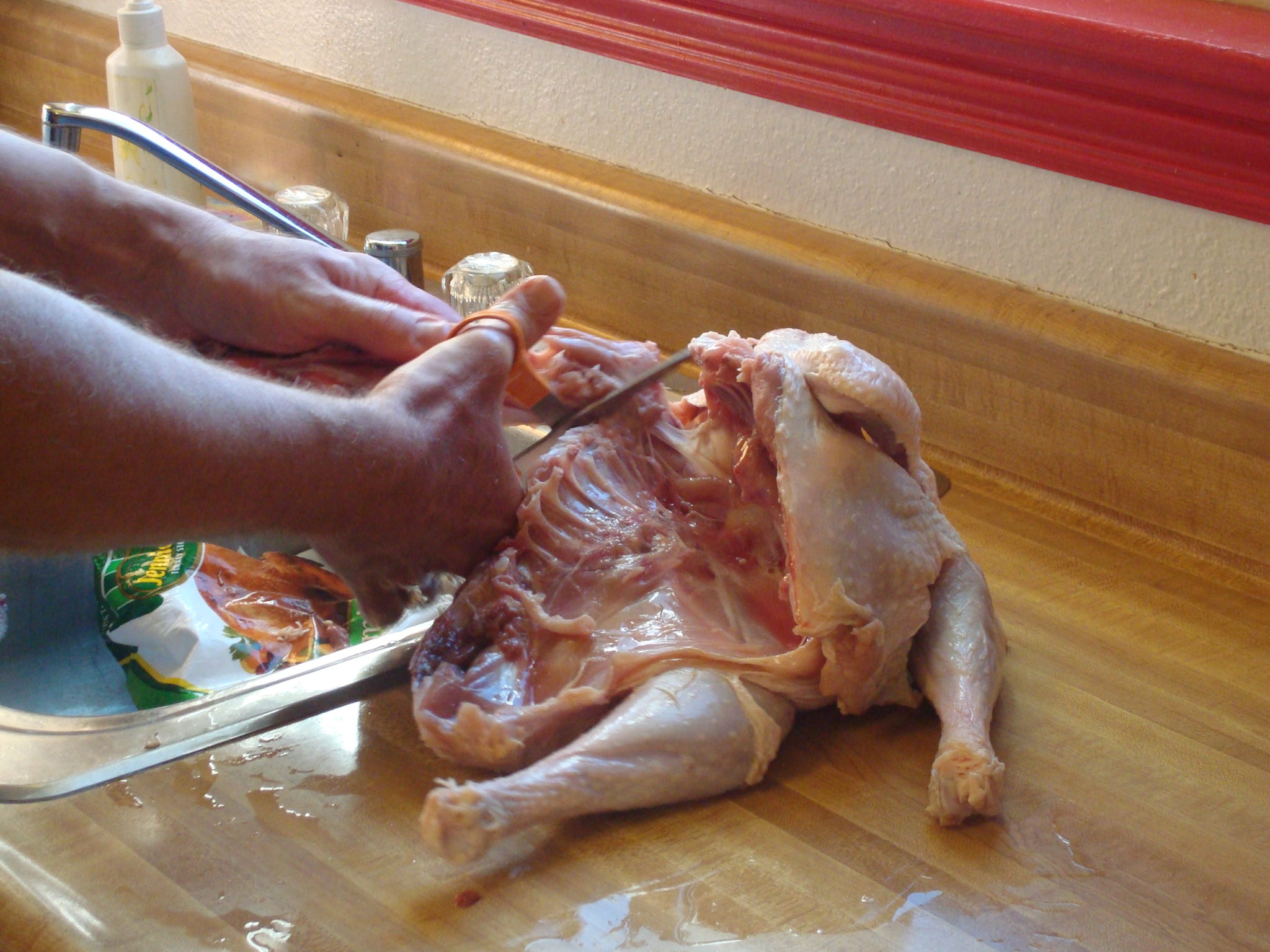 … finally removing it altogether. Then hope your grandma doesn’t smite you from her heavenly perch for not saving it to make soup. 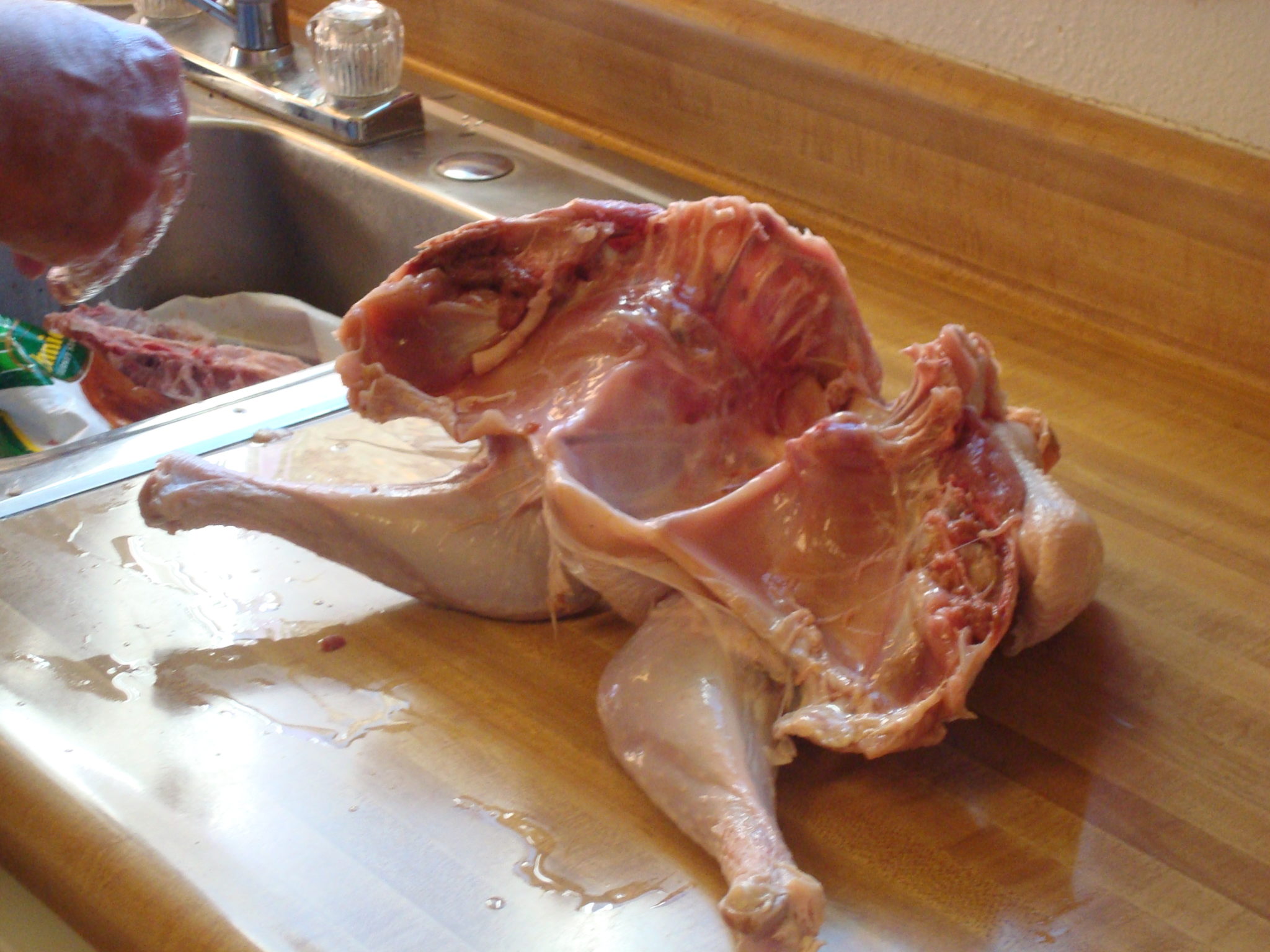 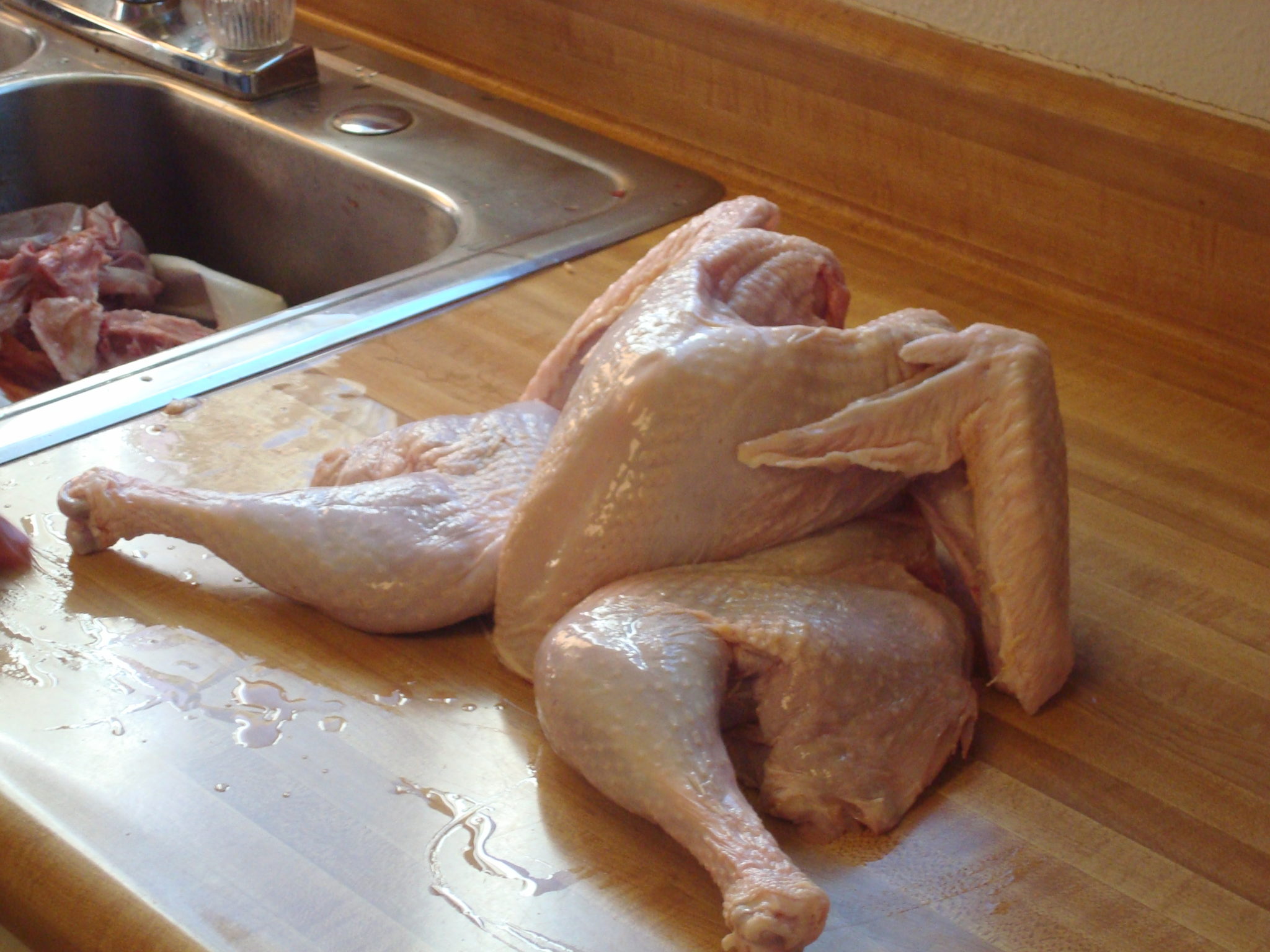 Turn it over. Maneuver it one last time in a demure pose. After all, how would you feel to be all naked on the kitchen counter like that?! 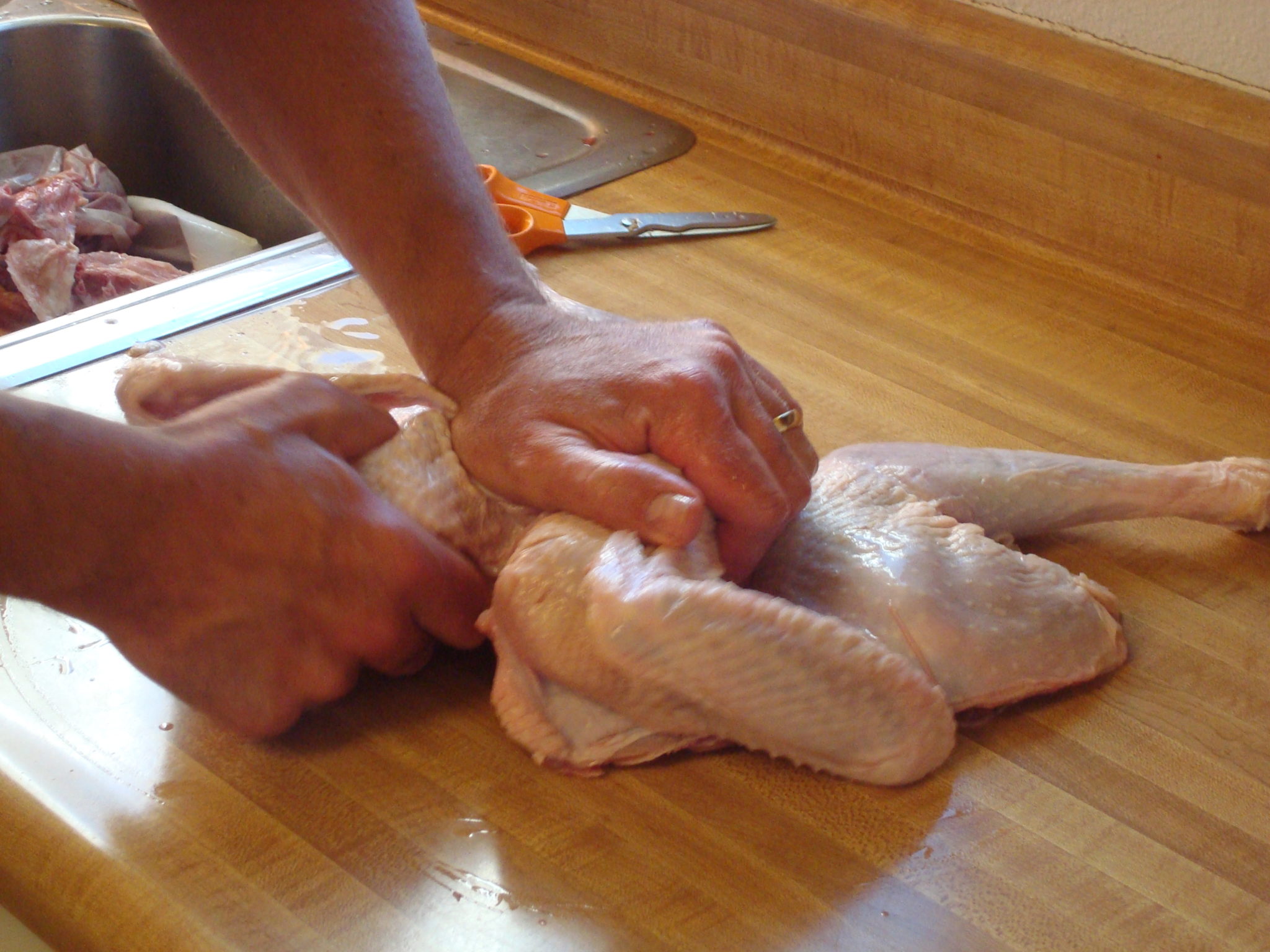 Press firmly on the sternum until it makes a delicious cracking sound. Like a really good chiropractic adjustment. 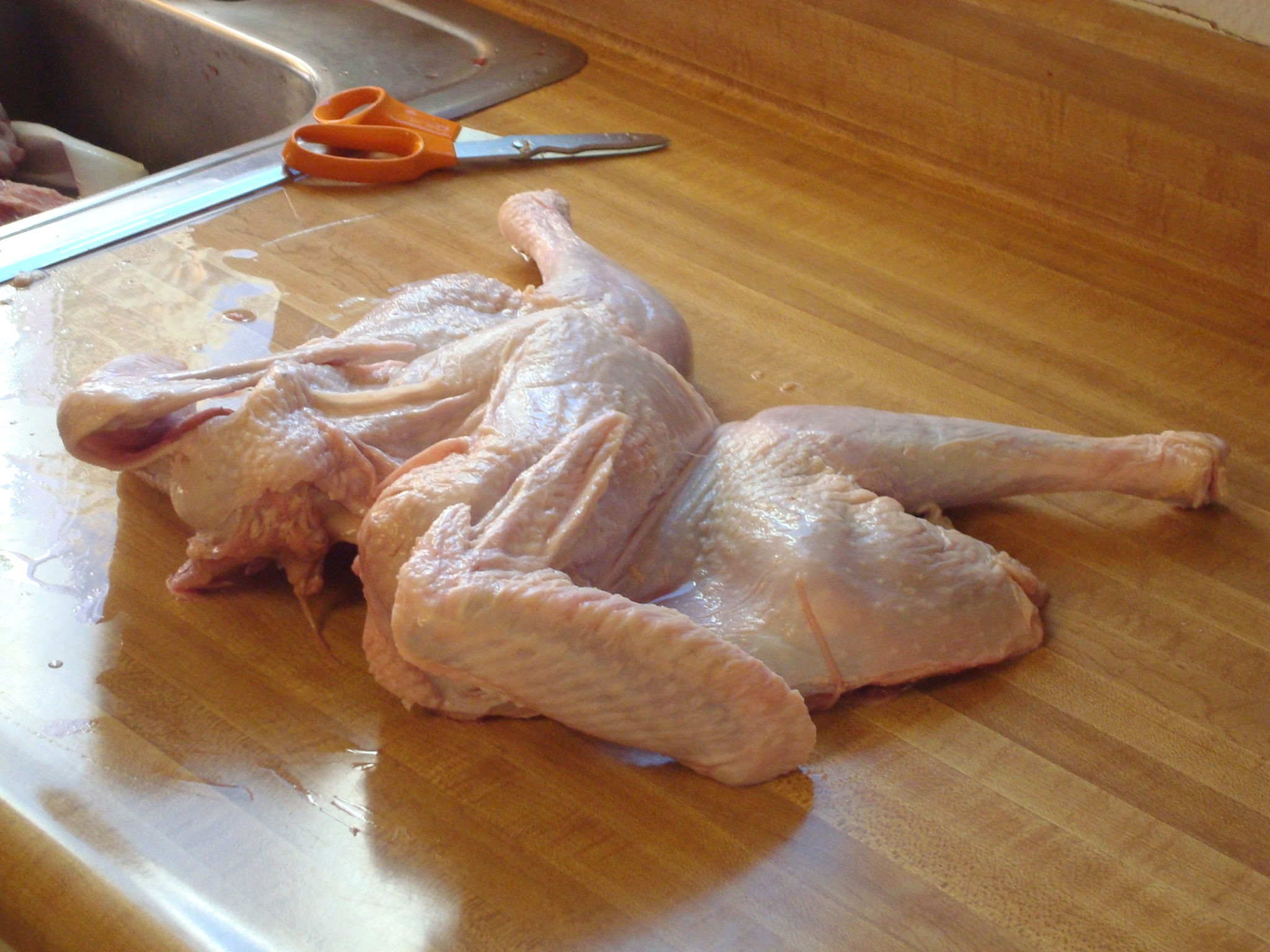 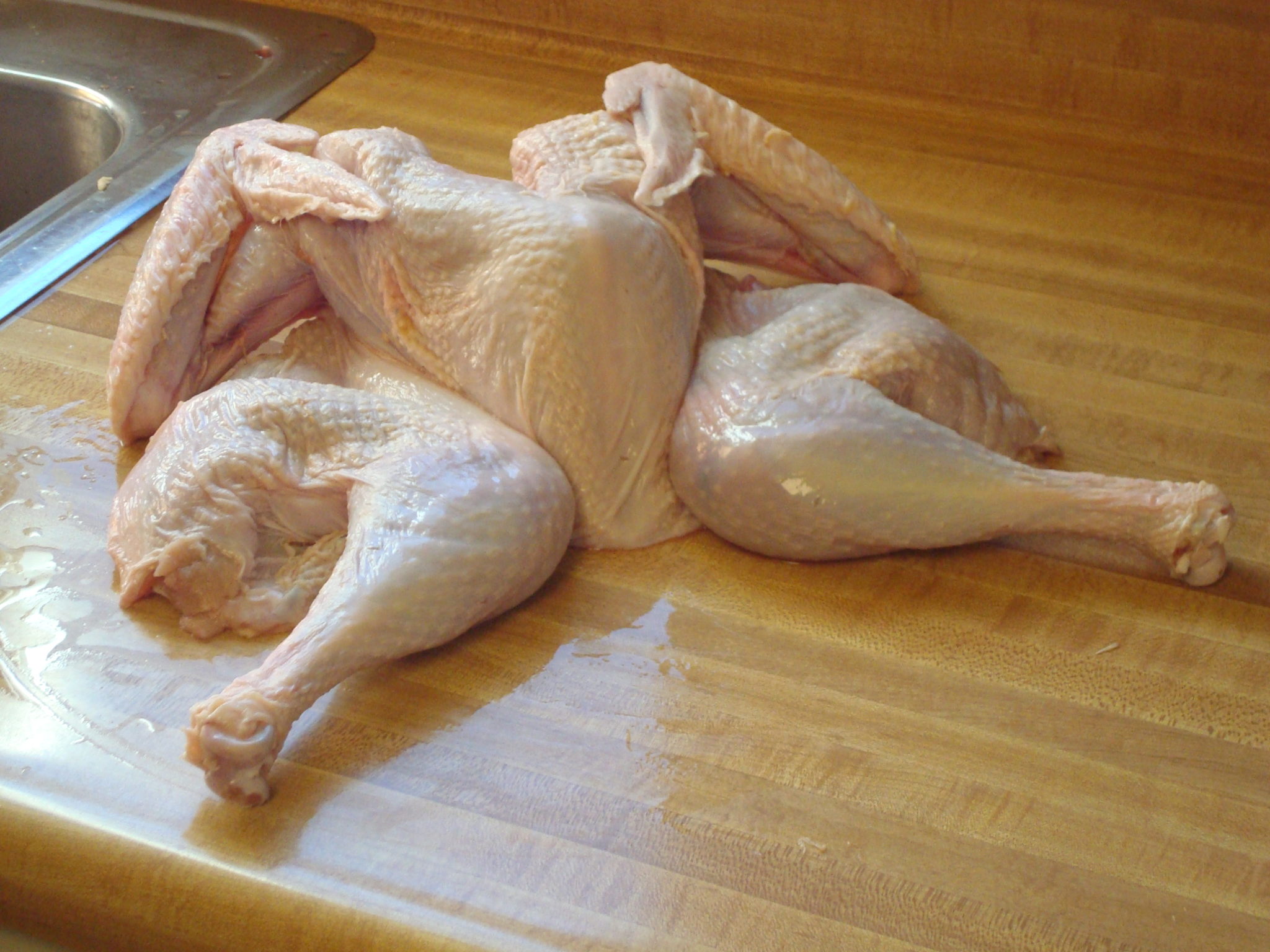 And posed one last time. Just because it’s fun. 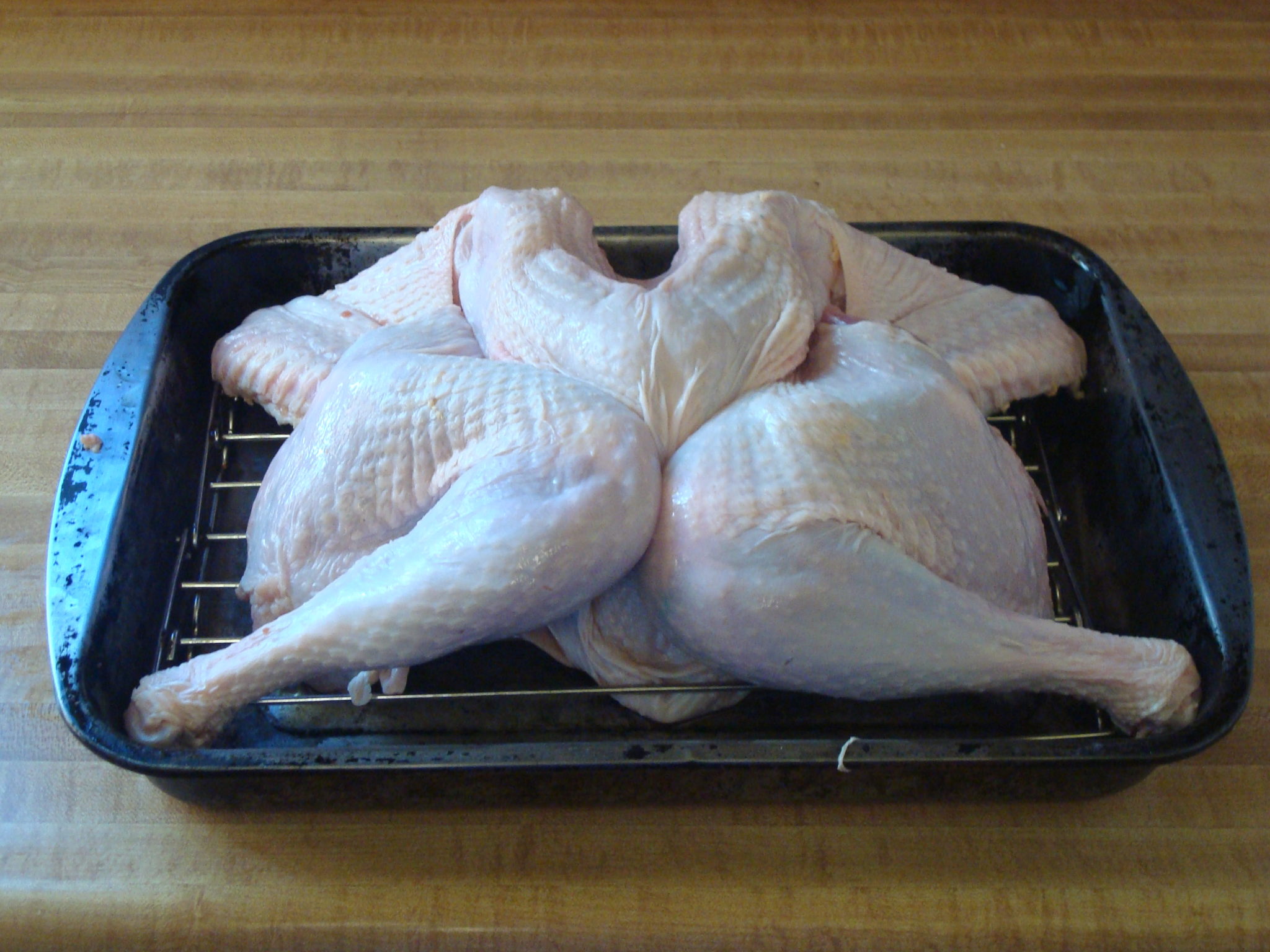 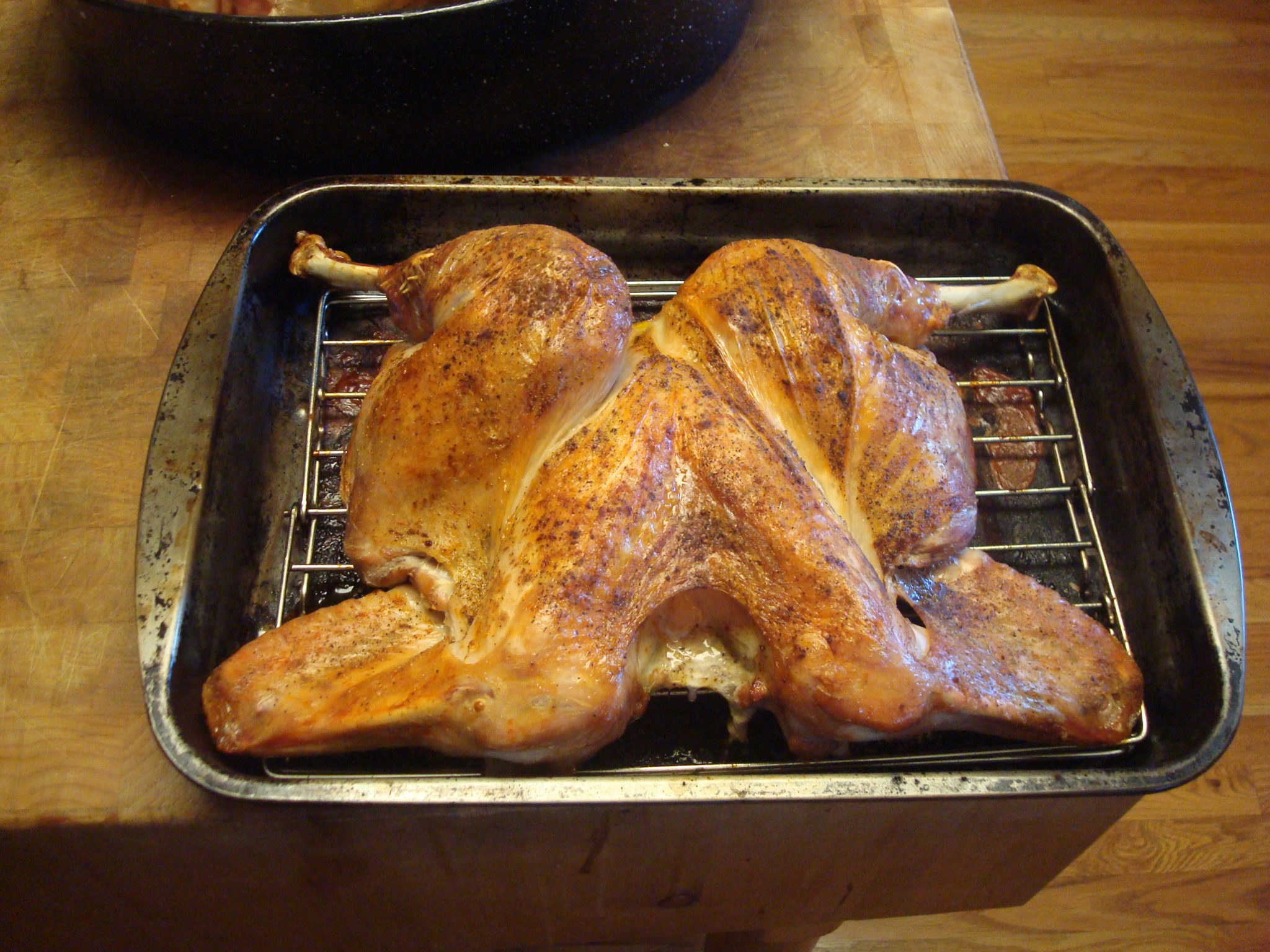 The benefits to spatchcocking are numerous and include more than just getting to play with your food. Your turkey cooks in about half the time, but choose one that’s no more than 15 pounds. (This one was about 11 pounds. We did another one in the traditional way. You know, in a bag.) You can get the spices everywhere much easier. Breast and thighs are done at the same time. Crispier skin. Easier to carve. Guaranteed blog entry with maybe the extra bonus of angry vegetarian comments.

You will sacrifice the big Norman Rockwell presentation, but by the time that happens, everyone is all liquored up anyway and just wants to tear into a drumstick.

Chief Spatchcocker says I wouldn’t be able to do it myself but methinks he underestimates the mighty, mighty power of my willfullness. Or what I’d do for a blog entry.

So … what do you think? Will you spatchcock YOUR bird?

7 thoughts on “Spatchcocking The Bird”