Happy Birthday To Me

I am soon to be 50 years old. It seems a bit anticlimactic because I received my first AARP card in April 2003. I’ll do the math for you. It was two months after my 42nd birthday. I’m sure there are algorithms and significance there, but for the life of me, I can’t figure out which variety.

I’d completely forgotten about that until I was cleaning out some old files and found it, oddly enough, just a couple of days after I received my current AARP membership card.

I don’t really care about my age, because that number defies logic, as I’m sure it does for you too, unless you are in charge of membership for the AARP. How can I be <insert whatever your age is> when I feel like I’m 20? [Note: if you inserted some number lower than 20, then this probably made no sense to you. It’s okay. It’s sweet that you played along with an old lady.]

But I’ve learned seven things, now that I’m one-third of the way through my life. Shut up. People do SO live to be 150. And they especially will a hundred years from now. I heard about it on the google.

2. Another thing I’ve learned is that everything I thought I knew when I was 20 was either wrong or I’ve forgotten it. Now that I’m 50 I hope to re-learn stuff. Important stuff. Not how to win at Pong or which leg warmers look best with my miniskirt but important stuff like if I can get any money back on my degree in Criminal Justice.

3. Most of the things you wanted when you were young you get by the time you’re 50 or you realize they were stupid things to want in the first place. And by the time you’re 50, you’re shedding the material stuff from your life like it was your collection of Quarterflash songs covered by Bananarama with backup courtesy of all the Men ”” those Without Hats as well as those At Work. (How many tablecloths does one woman need, anyway? Especially when that woman is too lazy to wash, iron, or even bend down to pull one out of the cabinet?)

4. When you’re 20 you expect to change the world. But when you’re 50 you realize the world changes around you and all you can hope for is the strength to change right along with it. Hence, the blogging and the incessant games of wii bowling.

5. When you’re 50, you can finally figure out which of the things your mother told you were true and which were simply things she said to shut you up, make you feel guilty and/or completely fabricated. Sometimes the sets intersect. (I can’t give you specifics right now, because my children are not yet 50 and they need to work this out for themselves.)

6. And speaking of kids, if you had them in your 20s, they have magically grown up by the time you’re 50. While they were often cute widdle things, I never realized how much I’d enjoy their company when I turned 50. They get to a marvelous age where they can pay their own bills, open wine bottles, and teach you delightfully novel ways to curse. It’s a marvelous day when you realize your roles have completely reversed.

Yep, I’m exactly the right age. Now bring me some cake, you young whippersnapper, you, so I can get on with my second adulthood. 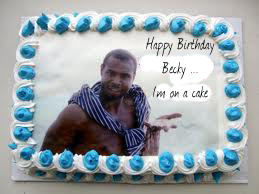 0 thoughts on “Happy Birthday To Me”