• As part of their settlement in the food poisoning case with Chipotle, one client asked for “Free Burrito” coupons. I suspect their attorney donated his 33% to a worthy cause.

• The first Pizza ATM was installed by its French manufacturer at Xavier University in Cincinnati. For $8-$10 you use a touchscreen to choose a pizza, it’s heated, dropped into a cardboard box and ejected through a slot. Finally. French food for the masses.

• The “Five Second Rule” was found to be five seconds too long.

• Shanti, the 41-year-old elephant at the National Zoo, received size-20EEEEEEEEEEEE custom made Teva sandals to help with her arthritis and foot problems. They’re like rubber bird baths without the pedestal. She also has some custom boots made from the spray-on lining used for truckbeds. They have red soles, Christian Louboutin-style. Like most reasonable women, she likes the more casual sandals better. 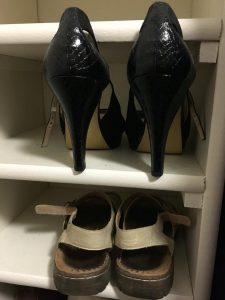 • July’s marijuana sales hit an all-time high. Even better than, you know, April’s.

• Left Hand Brewing is recalling Milk Stout Nitro because, despite it’s fully-disclosed name, it’s too fizzy when ‘hard poured.’ I guess I’ll just keep mine to drizzle over my cereal.

• Olive Garden is offering 10x the number of Pasta Passes as last year. The pass costs $100 and lets you eat as much pasta as you want for seven weeks. The time limit makes sense because they realize you’ll be in a carb coma and won’t be able to roll in until next year.

• Dennis the Menace had to sit in the corner. Again.

• 3,000 people participated in Philadelphia’s 8th annual Naked Bike Ride. Some wore undies, some wore body paint, some just wore a smile. All had to be treated for cooties.

• On this date in 1959, Elvis met 14-year-old Priscilla Beaulieu and a tiny crack appeared in the Universe.

• A bigger crack appeared when we learned a fertility doctor used his own sperm more than fifty times instead of the donated sperm. At least 8 people are now searching for just the right Father’s Day card.