You’ve probably guessed that I’m a reader, even though I don’t get to read for pleasure or discuss books with smart people nearly as often as I’d like. So about a year ago I begged a friend of mine to allow me to join her long-standing book club.

I like to imagine the vetting process was fierce, involving all sorts of surreptitious background checks, clandestine googling and phone calls to my mother.

I suspect it was less rigorous.

The group works as most book clubs work ”” we sign up for the month we’d like to host, we choose the book for that month then call the caterer to organize a feast related to the theme of the book. I kid. But the host does make a special trip to the liquor store and the bakery.

Members of the group can choose to read the book or not. Attendance at the party, er, meeting, does not hinge upon that decision. Thanks to these marvelous ladies I’ve read many books in the past year I would never have stumbled upon, thoroughly enjoying all but one. [I’m looking at you, BEAUTIFUL RUINS.]

Yesterday I finished the book chosen for April, THE UNLIKELY PILGRIMAGE OF HAROLD FRY.

I may never recover. 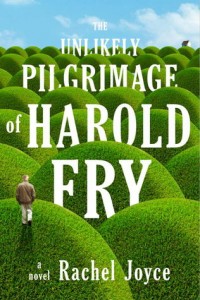 It’s a very British novel with quirky sweetness and universal truths flowing like so much Earl Grey. The story involves a sad, retired Harold who learns that Queenie, a friend from many years ago, is dying from cancer in a hospice 600 miles away. He writes a letter to her, but knows it’s inadequate. As he’s walking to the mailbox, he decides he must deliver it in person. He keeps on walking, leaving his angry and distant wife, Maureen, behind.

• “He watched the squares of buttery light inside the houses, and people going about their business. He thought of how they would settle in their beds and try to sleep through their dreams. It struck him again how much he cared, and how relieved he was that they were somehow safe and warm, while he was free to keep walking.”

• “Maureen gave a shrill laugh that sounded as if she had just emptied it out of a packet.”

• “He understood that in walking to atone for the mistakes he had made, it was also his journey to accept the strangeness of others.”

• “Maureen felt afresh the shame of not getting it. She longed to show him all her colors, and here she was, a suburban shade of gray.”

• “As they pulled away, she saw Harold, this stranger who had been her husband for so many years, with a dog trotting at his side, and a group of followers she didn’t know ”” but she didn’t throw a wave, or toot the horn.”

The writing, as you can see, is gorgeous, and I despair of ever turning a phrase like Rachel Joyce does. But there was so much more for me in this book.

You see, I am Harold. And Queenie. And Maureen. And their next door neighbor Rex. And the characters he meets in his travels.

Like Harold, I have an inexplicable, completely misunderstood friendship, the loss of which I mourn. Like Queenie, I’ve performed extraordinary kindnesses which have gone unnoticed and unmentioned. Like Maureen, I don’t “get” some of the very people I’m closest to, nor am I “got.” I have friends for whom ”” if I thought it would help ”” I’d walk across England.

I doubt I’ll ever be called upon to do that, but wherever I am, whoever I meet, I hope I can accept their strangeness, throw a wave, and toot the horn.

2 thoughts on “My Unlikely Pilgrimage”