Research and The Iceberg Theory

I joke that I write amateur sleuth mysteries because I hate research. But what I mean is that I hate the kind of research that readers get mad at you for. Like if I get a fact wrong about guns, or police procedure, or the exact layout of a city.

But I love all the other kind of research, that which informs the plot or adds a layer you didn’t even know you needed. Or, heck, even something that’s just delightful to learn about, even if you don’t end up using it in your story!

Here are some things I’ve been lucky enough to get to research lately for a couple of my works-in-progress:

In FICTION CAN BE MURDER I learned more about the art stolen by the Nazis during WWII. There’s a movement now to determine provenance of many pieces of important artwork and reunite them with their rightful owners. It’s a complicated task, as you can imagine. It involves most of the great museums in the world who are now tasked with investigating their collections to see if they are in possession of any of these looted works of art. But even if they determine the rightful ownership of the paintings, it’s often impossible to repatriate them because many of the families stolen from were destroyed during the war. There’s no one left to take possession of the art.

Hitler and the Nazis purged and confiscated anything they deemed to be “degenerate” art, mostly from Jewish citizens and art dealers and other enemies of the Reich. Some paintings were sold to other nations to raise capital for the Nazi war machine. Some were usurped for the private collections of highly placed Nazis. The rest was sent into storage in caves to hide them from the Allies.

George Clooney’s movie “The Monuments Men” is based on this story.

In FICTION CAN BE MURDER, there’s a visit to the Denver Art Museum with an exhibit of many of the looted works. It’s just a small part of the plot, but I found it a fascinating rabbit hole to dive into.

During my research quest, I was searching for specific subjects of paintings, and stumbled into the looted art stories. These are the paintings I refer to in the story. 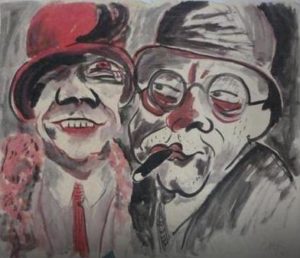 and “Man and Woman” by Wilhelm Lachnit. 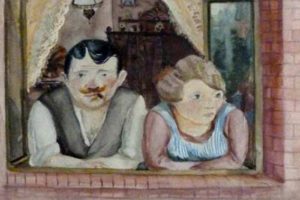 I love the stylized look of these two paintings ”” as did Charlemagne “Charlee” Russo, my sleuth ”” and it was exactly what the story needed.

The story behind the paintings was exactly what *I* needed. Stumbling upon fascinating stories is what keeps my brain clicking away.

It didn’t really fit in FICTION CAN BE MURDER to take a long detour into the land of looted artwork, and I’m reminded of the “Iceberg Theory of Writing.” The tip of the iceberg is what you show your readers. But everything underneath the water is what the author knows. All that research. Your characters’ habits, likes, and dislikes. Backstory. It’s all under there, floating around.

As a reader, do you like to learn tidbits in your novels? What’s something you’ve learned recently? As a writer, is it difficult to know when to stop researching a subject that fascinates you? How do you know how much to include in your novel?

2 thoughts on “Research and The Iceberg Theory”