Musicals make me swoon with joy at the dance numbers. Those flying feet, the percussion, the precision. I wanted to do it so bad.

As a kid, though, I don’t remember even asking if I could take lessons. Maybe I didn’t even realize that was a thing. Maybe I knew there was no money for that. Or maybe I was afraid to find out I was no good at it and would never be another Shirley Temple.

But I’m old now, and have my own money and a car to get myself to lessons. I also try to do things that scare me these days.

As the Ghost of Christmas Present says to Ebenezer Scrooge, “There is never enough time to do or say all the things that we would wish. The thing is to try to do as much as you can in the time that you have. Remember, time is short, and suddenly, you’re not here anymore.”

In early summer of 2016, I was at a party and a friend of mine mentioned that she had been taking beginning tap lessons at our local arts center. I perked up immediately. The more she talked, and the more I drank, the more eager I became. 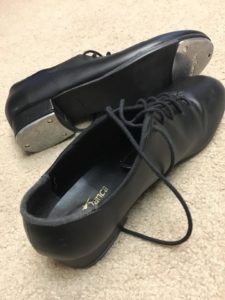 I bought some black lace-up taps shoes and registered for the next 6-week session. I wasn’t very good and the class wasn’t really a start-at-the-beginning kinda thing. The same people (mostly middle-aged women like me) just kept signing up and so the instructor just moved ’em all along and tried to drag the rest of us newbies with them.

The few sessions I took were hella fun, though, and I learned lots of basic steps. We did some routines that I could mostly follow along with, as long as I stood in the back where I could see someone who could actually remember all the steps. After a time, I even managed a passable time step!

But in the autumn, I started having weird pains in my back, which, long story short, turned out to be that pesky tumor in my spine. I went under the knife almost exactly two years ago today.

The arts center still offers adult tap lessons, but they are at a completely inconvenient time for me, so I started searching for online resources. Lo and behold, I found one!

For the cost of two sessions at the arts center, I bought this online tutorial package. I can do the lessons in my basement whenever it works for me and go back over the stuff I find difficult.

There’s also a Facebook group for the subscribers of the class and it’s inspiring and encouraging to see the videos they post, and to hear their stories.

So far, I’ve only been doing the warm-up, which I can alllllmost do ”” *shakes fist at paradiddles* ”” and the first lesson, which was a breeze up until the end. And then the delightfully optimistic Aussie instructor told me to go faster. Which is hilarious. Partly because I’m not that graceful, partly because my numb foot doesn’t always do what I say, and partly because my balance is iffy sometimes.

But guess what? I’m tapping! And it’s fun. Maybe there will be videos of my progress, yanno, when I progress!

What have you always wanted to do? What’s stopping you? Can you tap dance? Any tips to help me speed up?