Crime In The Hood

Last week, when you were stuffing your face with Valentine goodies, I was strapping on my cape and fighting crime. 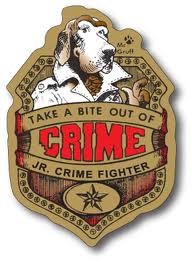 I was at my computer (duh) typing (double duh) when my concentration was broken by my doorbell and noisy banging on my door. As I typically do, I ignored it as simply another solicitor or maybe a religious busybody wanting to know about my eternal soul.

But they didn’t stop. I looked out the window and saw a green car parked in front of my house but not directly in front ”” closer to the property line I share with my neighbor.

I watched as a kid walked away from my porch and back to the green car and got into the passenger seat. But they didn’t drive away. Instead, the driver got out of the car and walked up to my porch.

Now, if you know me at all, you know I’m a perfectly non-racist-type dame. I love all the little children of the world. Red or yellow, black or white, they are precious in my sight, but these particular little children stuck out in my neighborhood like purple polka-dotted elephants wearing clown shoes and tutus.

I’m not above a bit of circus profiling.

But I’d had enough and went downstairs, yanked open the door and said in my Mom voice, “What the hell are you doing banging on my door all day?!”

To which he replied, “I was just looking for Josh.”

“Sorry!” and off he skipped back to his car. He didn’t really skip, but he did have to hitch up his pants three times walking the length of my driveway so they wouldn’t pool around his ankles.

As I watch them pull a U-turn in the street, I thought, “No way that kid knows anyone named Josh.” And then my brain started going clickedy clickedy … “Oh! Up to no good, they were.”

Yes, I turn into Yoda when I finally understand something.

So I hopped in my car and followed them to see if they were going to supply their particular brand of joy anywhere else in the ‘hood. I passed them parked half a dozen doors down and wrote down their license plate number. Again, I saw the kid walking back to the car. Seems my neighbor had answered her door too. Clearly they hadn’t yet found their invisible friend Josh.

I pulled over and waited a bit then followed them out of the hood. I circled back home when I saw they were on their way. When I got home I called the town police even though I know we live in county jurisdiction. (I’m about a stone’s throw from town hall and I know they take each other’s calls. Plus, it was the first phone number I saw.) No problem, they transferred me to the sheriff’s department so I told my story again and gave them the plate number and description of the car. Almost before I hung up the phone, I saw a patrol car driving up my street. The officer called me thirty or so minutes later to tell me he didn’t find them.

Imagine my surprise when I got a call the next day from a detective from the town police department. There were no burglaries in our neighborhood, but there had been a couple in a different ‘hood, part of the town jurisdiction. Because I had called the town first, they had a record of it and began to piece the puzzle together.

Turns out they had a couple more witnesses to the car and the kids to place them near the scene of those burglaries.

The detective asked if I could identify either of them. Dunno, but I’ll try. I also advised him I’d seen them at my neighbor’s house and maybe someone there could identify them too. (Turns out the detective knew these neighbors because their sons are friends. This is not the teensiest of small towns, but it may as well be.)

He came to the house and showed me photos of six young men. I really didn’t think I’d be able to pick either of them out, since our contact was so brief and I was wearing my Mom Squint. You know, the one that gouged out that what-were-you-THINKING vertical crease between my eyebrows.  But as soon as he put the paper in front of me, I saw the kid I opened the door to.

As the detective was packing up his stuff, he told me I picked the one he was hoping I’d pick. I asked if there hadn’t been any arrests yet, how did they have a photo of him? He told me this kid ”” 22 years old ”” already had a long criminal history. Sad.

So that’s the story of how I valiantly stopped all the crime in my town.

Since I’ve valiantly stopped all the crime in my town, this doesn’t really apply to me, but you could benefit from some of these tips if bad boys are casing your joint. (See? I even know the lingo.)

• Don’t open your door to droopy-drawered hoodlums. Even if you’re annoyed.

• Pretend you’re talking on the phone and yell through the door, “I’m on a call. I can’t help you now.”

• Keep the radio or TV on so it sounds like people are home.

• Leave a huge leash and a big fat collar on your porch so it seems like you own a pet rhinoceros. A “beware of the dog” sign might be a nice touch too.

What else? Any good crime prevention tips?

0 thoughts on “Crime In The Hood”

PrevPreviousHappy Birthday To Me
NextTiger MomsNext