I read Amy Chua’s book BATTLE HYMN OF THE TIGER MOTHER and loved it as much as a Chinese mother loves torturing her children. I kid. I loved it way more than that! 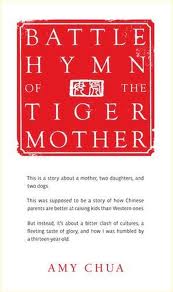 You’ll remember the hoopla recently about this book because it was mistakenly reported that Ms Chua wrote a book saying Chinese mothers were better than the rest of us. In reality though, this is what she says:

“All decent parents want to do what’s best for their children. The Chinese just have a totally different idea of how to do that. Western parents try to respect their children’s individuality, encouraging them to pursue their true passions, supporting their choices, and providing positive reinforcement and a nurturing environment. By contrast, the Chinese believe that the best way to protect their children is by preparing them for the future, letting them see what they’re capable of, and arming them with skills, work habits, and inner confidence that no one can ever take away.”

We should all be such Chinese parents.

I loved so many things about it, but the most fabulous just might be the serendipitous Wall Street Journal article title that caused so much buzz. As a writer, I’m truly jealous. Someday I hope to write something that gets banned in the schools or where I’m misquoted enough to sell a gazillion books.

In the meantime, though, I guess I’ll just tell you why I liked it.

The passages about her using her Chinese mothering skillz on their dog had me in stitches. “I had heard of dogs who can count and do the Heimlich maneuver.” Finally she realized, “Although it is true that some dogs are on bomb squads or drug-sniffing teams, it is perfectly fine for most dogs not to have a profession or even any special skills.”

Second, she said a lot of stuff I truly believe.

As a mother who argued with my son’s stupid kindergarten teacher about this very issue, I can relate. Self esteem comes from achievement. You can’t give it to kids; they must earn it. When we set the bar so low and we give everyone a participation ribbon, it dumbs down everyone.

Third, she doesn’t take herself too seriously.

“Do one small thing for me, Lulu,” I’d say reasonably. “One small thing: Play the line again, but this time keep your vibrato perfectly even. And make sure you shift smoothly from first position to third. And remember to use your whole bow, because it’s fortissimo, with a little more bow speed at the end. Also, don’t forget to keep your right thumb bent and your left pinkie curved. Go ahead ”” play.”

“Children can be horribly cruel. ‘Never make fun of foreign accents,’ I’ve exhorted them on many occasions. ‘Do you know what a foreign accent is? It’s a sign of bravery.’ “

“The truth is I’m not good at enjoying life. It’s not one of my strengths. I keep a lot of to-do lists and hate massages and Caribbean vacations. Florence [her MIL] saw childhood as something fleeting to be enjoyed. I saw childhood as a training period, a time to build character and invest for the future.”

Sixth, she made me think.

“When I look around at all the Western families that fall apart …. I have a hard time believing that Western parenting does a better job with happiness. It’s amazing how many older Western parents I’ve met who’ve said, shaking their heads sadly, ‘As a parent you just can’t win. No matter what you do, your kids will grow up resenting you.’ By contrast, I can’t tell you how many Asian kids I’ve met who, while acknowledging how oppressively strict and brutally demanding their parents were, happily describe themselves as devoted to their parents and unbelievably grateful to them …. I’m really not sure why this is. Maybe it’s brainwashing. Or maybe it’s Stockholm syndrome.”

Seventh, she related conversations I’ve had with my own kids.

“This time, however, Sophia exploded back. ‘Mommy! I’ll clean it up, okay? You’re acting like I just robbed a bank. Do you know what a good daughter I am? Everyone else I know parties all the time, and they drink and do drugs. And do you know what I do? Every day I run straight home from school.’ “

Okay, I could go on, but I’ll stop now, because you probably understand that I really enjoyed this book. She made me laugh and she broke my heart, just like a good book is supposed to do.

Have you read it? What did you think? Will you read it now? What were your parents like? What kind of parent were/are you?